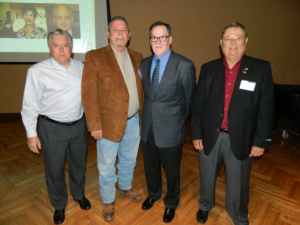 The North Texas Home Builders Association learned about the upcoming $59.5 million school bond election during the April Membership Luncheon held Thursday, April 2, at the Kemp Center for the Arts.Dr. John Frossard, superintendent of the Wichita Falls Independent School District, gave a detailed explanation and then, along with school board members Kevin Goldstein and Bill Franklin, answered questions.

Dr. Frossard opened by reviewing last year’s failed $125 million bond election. He then stated the differences in this year’s proposal. He discussed the projects to be covered by the bond and the estimated economic and tax impact.

The upcoming bond election includes $35.75 million for a new Career and Technical Education Center, $25 million for junior high school additions and renovations, $500,000 for safety and security enhancements, $500,000 for technology infrastructure, and $1.75 million for Memorial Stadium parking and restroom improvements. The total proposal is for $63.5 million in improvements and new construction with $4 million committed from the WFISD fund balance.

Dr. Frossard said the Career and Technical Education Center would help meet the Texas House Bill 5 endorsements. He also said it would help provide students with the necessary tools for careers after high school as well as for those planning to attend college.

Among the potential offerings are Hospitality and Tourism courses such as restaurant management, culinary arts, and practicum in culinary arts; Public Service courses including medical sciences and educational aide; Business and Industry courses such as graphic design, animation, machining, and accounting/finance; S.T.E.M. courses including networking, biotechnology, and aerospace technician; Law, Public Safety and Corrections with courses such as law enforcement I, court systems and practices, and correctional services; Public Service including paralegal and court reporting courses; and Business and Industry with courses in plumbing, H.V.A.C., and water operations through environmental science.

The local economic impact is estimated at $89.7 million including $33.4 million in labor costs. State and local taxes should benefit by more than $2 million. He also estimated that more than 900 new jobs will be created with the construction from the bond.

The estimated tax increase for a homeowner with a $100,000 home is estimated at just $7 per month. He noted that upon passage of the bond, WFISD’s tax rate of $1.22 will continue to be the lowest of any district in Wichita County.

Dr. Frossard said the improvements at Memorial Stadium are needed because of the more than 2,000 events held each year at the sports complex. “I hear the most complaints from people about the potholes in the stadium parking area.”

In speaking in favor of the bond, school board member Bill Franklin reminded the gathering that he was against the last bond. “I didn’t think it was the right bond. This is the right bond!”

Board member Kevin Goldstein said, “This is a common sense approach based on what the students need.”

Also speaking in favor of the bond was Wichita Falls Chamber of Commerce & Industry President Henry Florshiem. He noted that in a survey of Chamber members following the previous bond election, building a Career and Technical Education Center was the members’ biggest priority.

“Attracting industry to our area has changed in the past 20 years. No longer is it about how much money you are offering. Now companies want to know if this is a place where you want to live and if we can grow our own labor force. This bond is a way to do that.”

Dr. Frossard said the Career and Technical Education Center would be run much like a business. “Besides the many classes, we will be teaching the students the soft skills they need to be successful in the workforce.”

He also said the center is not just for students not planning on going to college. “It will offer college and career readiness planning.”

All three board members stressed that using local contractors for the construction work would be a priority.

As for the future, Dr. Frossard said WFISD has learned from last year’s bond defeat and, instead of offering an infrequent large bond package, would be offering smaller bonds every five to seven years to cover needed construction and growth.