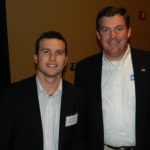 Scott Norman, executive director of the Texas Association of Builders (TAB), discussed the current legislative agenda with the members of the North Texas Home Builders Association on Thursday, Jan. 17, at the Kemp Center for the Arts.

The TAB is the third largest builder association in the nation with more than 10,000 members and 29 local home builders associations. Norman said the legislative session in Austin started last week with many major issues before it. He noted that the state senate is more conservative after the last election while more than half the members of the Texas House of Representatives are in their first or second term.

Among the major issues is how to deal with the fast growing population. Texas is expected to double in population in the next 50 years. This causes major concerns about the state’s water capacity and usage. Expanding the number of lakes and ways to provide the population with the water it needs is a major concern. He noted that there is $11.4 billion in the state’s Rainy Day Fund to help fund future water projects.

School finance is another major topic in Austin. Norman expects a special session later this year after the 180-day regular session to deal with school finance. There are 1,080 school districts throughout the state. Because of funding issues, vocational education programs are being dropped across the state. “This is leading to massive worker shortages in places like West Texas,” he said.

Norman also talked about funding political candidates who believe in free enterprise and private property rights. He stressed the importance of TAB’s HomePAC to raise money for candidates. “Our goal this year is a contribution to our PAC of at least $25 from every member.” He added that $450,000 was given out to candidates for the last election. “To have a voice in Austin, we have to play the game.”

Norman noted that the Sunbelt Builders Conference & Trade Show is moving to San Antonio this year. The dates are June 24-25. He said there will be 220 exhibitors on hand. “It’s a great time and place to take your family for a vacation. The J.W. Marriott San Antonio Hill Country Resort has two PGA golf courses and everything else for a family vacation.” The conference has special room rates for those who call now.

He also noted that OSHA is sending 200 inspectors to Texas. “Every builder must have a safety plan on file. We have developed model safety plans for our members.”

Norman said the Texas economy is picking up. “Sales taxes for new car purchases are up 30 percent!”

Preceding Scott Norman’s talk, Wayne Pharries, Government Affairs Committee chairman said the Rally Day in Austin is set for Feb. 20. He urged as many members as possible to attend. He also urged support for the HomePac.

Lastly, it was announced that member John Harmon has earned his Graduate Master Builder certificate, joining Alan Hinson as the only two members with that professional rating.