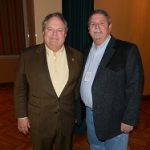 Saying the upcoming Republican primary “is where it’s at,” State Senator Craig Estes urged everyone to get involved and to vote March 4 as he addressed the February Membership Luncheon of the North Texas Home Builders Association at noon, Wednesday, at the Kemp Center for the Arts.
Adding that this is an interesting political season both in Texas and nationally, Sen. Estes said is supporting Republicans Greg Abbott for governor and David Dewhurst for lieutenant governor.
Sen. Estes, who has represented the North Texas area in the state senate since 2001, noted that as chairman of the Senate’s Agriculture, Rural, and Homeland Security Committee, he has had “an extremely quick education” concerning homeland security and the Texas border security. “Securing the border must be our first priority!”
In talking about the Texas economy, Sen. Estes quoted a Time magazine story that said the United States should be run like Texas has been run during the past 12 years. He gave a great deal of the credit to Gov. Rick Perry, Lt. Gov. David Dewhurst, and speakers of the Texas House of Representative Tom Craddick and Joe Strauss for the growth in the Texas economy during those 12 years.
“Texas has now surpassed California in tech imports. We have also added 331,000 tech jobs in Texas. I have had a front row seat during the last 12 years watching Texas growth.”
He added that more people are moving into Texas every day. This is causing a strain on the state’s transportation system and water resources. “People are moving to Texas is record numbers to take advantage of the business and economic opportunities offered by our state.”
As for the budget passed during the last legislative session, Sen. Estes praised the emphasis on water resources and the $3.4 billion added to public school funding. He talked about how the “rainy day” fund has grown primarily due to increases in oil and natural gas severance taxes and how a portion of that fund is being used to increase water resources.
He said the legislature has had to set priorities while keeping the budget in balance. He said the budget is actually decreased 11.5 percent compared to 10 years ago. He quote President Ronald Reagan about government and budgets. “Reagan said, ‘Reduce the government’s budget and leave the family budget alone.’”
In other business, John Harmon announced that the parade of Homes entry deadline is March. 1. The 2014 Parade of Homes isJune 7-15. Barney Brock, Eddie Holcomb and John Harmon represented the association at the annual International Home Show held recently in Las Vegas.