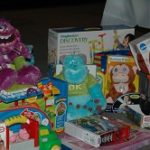 If you weren’t able to attend this year’s Association Christmas Party December 12, 2013 at the Elks Lodge you missed a fabulous evening.  The evening started with shrimp cocktail, salsa and chips with many members visiting with one another while the Elks Lodge cooks prepared a mouthwatering rib-eye steak dinner.  The room was filled with laughter and fellowship until dinner was served.  As everyone finished eating President Barney Brock gave the association announcements and then presented the Wichita Falls Fire Department volunteers with toys for Operation Santa.  The opportunity to give so many gifts to the area fire departments for Operation Santa was a joyous occasion.  Operation Santa chairman Randal Reel along with his wife Sheri, Kathy Bazil, Chance Culley and Kara Kirkpatrick where in attendance to accept the gifts on behalf of the Wichita Falls fire departments.  Randal expressed their gratitude and explained due to the economy they are constantly adding new families in need to their distribution list and without the generosity of people and associations as the North Texas Home Builders it would not be possible to supply these needs and many area children would go without having a Christmas.

We are blessed to have so many in our association who reach out to help the community.

After the presentation everyone listened to member Sharon Tucker of Atmos Energy give directions on the evening scavenger hunt event.  Each table was asked to be a team and pick one person to be the team leader.  The team leader was asked to come to the front of the room where 18 Christmas bags were set up with a stack of instructions and clues in front of each bag.  The first instruction was to take wrist bands and band each member of the team together leaving two members at each end of the train with a loose hand.  After they went back to their table and banded everyone together the team was to return to the front to receive a clue to find the first item on a list of seven items.  Not every team’s first clue was the same item.  The team would have to go find the item from that clue, bring it back and put it in their sack then take the next clue until they found each item.  Scurrying and laughter filled the room as teams dashed to and fro and in out and out of the building following clues to their next item.

Each item was donated by one of six new members for 2013 and their name and company was attached to that item. The final rules for the hunt were to list the name of the person and the on the final page.  The teams to turn theirs in correctly first would be the winners.  It was a blast watching everyone pulling their team members along, finding an item and trying to get through the crowd to get to their next clue.  Many teams were finished finding their items but didn’t quite understand they were suppose to list the member on the item and not list their team members on the final page.  Unfortunately this was the defeat for some teams that could have taken first place.  After Barney announced the winning teams and each one received their treasures it was time to draw for door prizes.  As the person with the winning ticket would come to receive their prize they would draw for the next lucky recipient.  It was truly an enjoyable evening of fun.

We were also grateful to have Maj. Ulmer and his wife Heather along with MSgt. Cheryl Broom and her husband Lloyd from our adopted squadron attending as part of our extended family.  It has been a pleasure having the special relationship we’ve developed with the 363rd “Sidewinders” Training Squadron.

The Association says thank you to each of you for participating by bringing gifts for Operation Santa as well as ABC Supply, Archer Title, Sunspot Tanning, Christmas In Action, Guarantee Title, Lowe’s, Lantern House, The Ember Shop, Union Square Federal Credit Union and United Supermarket for donating the door prizes and United Supermarket for donating the Christmas Bags for the scavenger hunt.