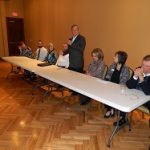 The North Texas Home Builders Association and the Wichita Falls Association of Realtors held a joint luncheon meeting on Thursday, March 6, at the Kemp Center for the Arts. A panel discussion question-answer forum was held to answer all questions concerning home loans, interest rates, credit scores, and more.

Jerry Phillips was asked to explain how Dodd-Frank affects marginal borrowers with lower credit scores. John Wilson asked if it was possible to get a home loan with a credit score below 640.

The question was asked of the panel if they thought interest rates would rise during the next 12 months. The consensus was that rates will continue to “creep up.”

The question was asked about how difficult is it to get a home loan if one is self-employed with wildly fluctuating yearly income. Bill Franklin answered that he didn’t think it would affect getting a loan too much. He said they would look at the average income over the past two or three years.

Other questions included “Will seller contributions be counted against the buyer? Should property be insured at replacement value? How are first-time homebuyers’ affected by changes in mortgage banking laws? If Fannie Mae and Freddie Mac disappear will the 30-year mortgage disappear?”

In other business, WFAR President Penny Riordan announced that the Chili Cook-off will be held April 11. John Harmon, vice president of the NTHBA said he and President Barney Brock recently attended the International Builders Show in Las Vegas and were told that new housing starts in 2013 were up 13 percent with Texas leading all 50 states in housing starts.