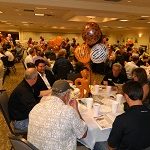 More than 140 persons attended the Parade of Homes’ Kickoff Luncheon prior to the opening of the Parade.

The 61st Annual Parade of Homes sponsored by NTHBA and Builders Lumber Company was a huge success with a record turnout for the nine-day event, said Steven Hinson, president of the North Texas Home Builders Association. “We sold 307 more tickets than last year, for a total of 2190. We have had an increase in attendance each of the last three years.”

The Parade began with the “Kickoff Luncheon” on Friday, May 31, at Clark Student Center on the campus of Midwestern State University. A total of 142 persons attended the luncheon that included a silent auction benefiting the Texas Association of Builders HOMEPAC fund that is distributed throughout the state of Texas to help elect officials who work to keep the home building industry vital and homes more affordable for the buyer. The Kickoff Luncheon was sponsored by Landmark Title. The food was prepared by the Kiowa Kooks.

Following the luncheon, a ribbon-cutting ceremony was held at the Showcase Home in Canyon Trails. The ribbon was cut by Mayor Glenn Barham.

A total of 15 homes were open for viewing during the Parade. Again this year, Builders Lumber Company was the corporate sponsor for the Parade.

At the June 19, 2013 NTHBA board of directors meeting, the drawing will be held for the 2013 Arctic CAT ATV “Grand Prize.” Everyone purchasing a ticket to view the Parade entries was eligible to win the Grand Prize. 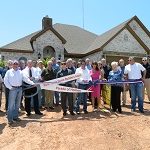 Mayor Glenn Barham cuts the ribbon for the Showcase Home for Builder Stan Mountain and the rest of the members of the North Texas Home Builders Association.