June 2nd marked the Kick-Off of the 2017 Parade of Homes. After many months of preparation from the builders some were still making final preparations at the 11th hour.

Even though a few homes needed minor polishing, on June 1st, parade home judges, Wichita Falls Association of Realtors President Sandie Hadsell, TAB Area II Vice President Gene Lantrip and District 4 Councilor Brian Hooker met Parade of Homes Chairman Barney Brock at the NTHBA Office to begin making the rounds to each parade home for judging. judged in 6 categories: Best Kitchen, Favorite Master Suite, Best Outdoor Living, Best Curb Appeal, Best Use of Living Space and Best Overall. Each category had particular criteria it was judged on, for example, Favorite Master Suite was judged by: Overall Design & Functionality, Vanities, Tub & Shower, Storage & Closet(s), Innovation and Special Features. There was a lot of items the judges had to take into consideration while giving each item a score from 1 -5 with 5 being the highest an item could score. After all judging was completed, the score cards were calculated and the winners were announced at the June 2nd Kick-Off lunch.

Over 130 people weathered the rain to attend the Kick-Off lunch. The lunch was definitely worth attending. Bistro Express set up a spread of grilled tenderloin, sautéed green beans, corn soufflé, mashed potatoes, rolls and pecan blondie desserts. This was all compliments of our lunch sponsors: Archer Title of Texas, Guarantee Title Company, Landmark Title and Stewart Title Company. After indulging in a great meal, Kolter Lukert acted as MC and thanked our Parade Sponsor – Builders Lumber Company and co-sponsor Patterson Family of Dealerships. He also thanked the above mentioned lunch sponsors along with the 2017 NTHBA Partners, Diamond – Atmos Energy, Platinum – Union Square Credit Union and Gold First National Bank. He wasn’t finished yet. He continued to thank those responsible for our silent auction items that included the 2017 NTHBA Partners as well as Realtors Linda Miller, Barbara Eckerd, Roxanne Johnston and La Donna Smith and NTHBA Members American National Bank, Decorator Outlet, Proven Surveying and The Ember Shop. The thank you list continued with those who donated the prizes for the Parade Home Categories which included McBride’s Steakhouse, Massage Envy, Lowe’s and Longo Landscaping. After expressing gratitude to so many on behalf of the Home Builders Association, Kolter introduced Mayor Santellana. 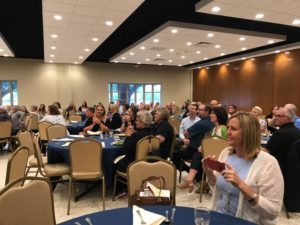 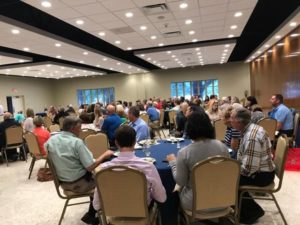 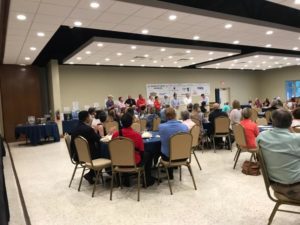 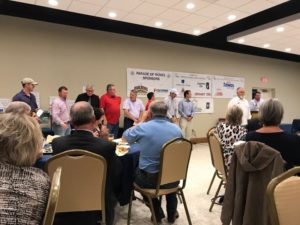 Mayor Santellana addressed the crowd saying, I was thinking about what I should talk about and yes, I could talk about how the parade of homes helps to increase the tax base for the city, or how important the housing industry is on the basis of helping people with one of the biggest investments of their lives but I wanted to talk about what a home is. He mentioned how he had lived in several different homes at various stages of his life and how each one had a purpose for the time. He went on to tell the audience how important a home is in raising a family, making memories and a place to live and be a part of a community. He concluded with how blessed he was to be a part of this community and how much he enjoyed serving the people of Wichita Falls, a place he calls home.

After a wonderful story from Mayor Santellana, Kolter introduced each of the Builders of the 2017 Parade Homes. Classic Builders – Gary Broyles & Michael Grassi, Cornerstone Custom Homes & Construction – Sean Snyder, Dennis Company – Steven Hinson and Alan Hinson, Harmon & Holcomb Homes – Eddie Holcomb, Justin Holcomb & John Harmon, Lance Friday Homes – Barney Brock and R.J. Wachsman Homes – Randy & Tanner Wachsman. After their introduction it was time for the big announcement of who the winners were and for what category. 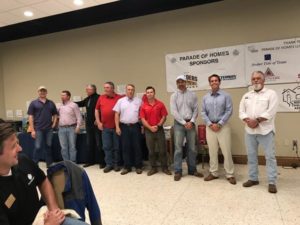 The lunch ended with the announcement of each of the silent auction item bid winners.

It would be amiss if we didn’t give a big THANK YOU to Habitat for Humanity who spends countless hours preparing bags for every parade home entry with tickets and cash for the ticket sales each day of the parade. They also are responsible for counting the tickets and money each day after the parade has ended. In order to make this all happen Carla Dowlen, marketing director for Habitat for Humanity has to recruit over 100 volunteers. She also is the backup plan if a volunteer is not able to fulfill their obligation. Carla Dowlen has done a fantastic job each year coordinating the event as well as keeping a superb daily record of tickets sales and informing the NTHBA how successful each weekend of the parade is.

The North Texas Home Builders Association was not disappoint elated again this year. Even with a low number of homes to tour, there were almost 1700 people attend the parade of homes. Almost 400 more than last year. KUDOS’ TO EVERYONE for making the 2017 PARADE OF HOMES a huge SUCCESS!!!