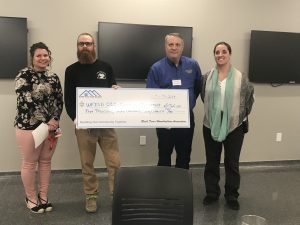 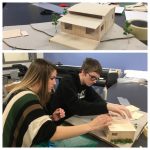 On March 7th, 2019 the North Texas Home Builders Association, for its second year now, had the opportunity to present the Wichita Falls Career Education Center Construction Department with a check. This year’s donation has increased from $4200.00 in 2018 to $5760.00 and the NTHBA hopes that trend will continue.

But this year they launched the biggest project of all: An actual 684 square foot house.

The project – once only a creative idea and a dream living inside the head of Mr. Little – was put on the table during the planning and designing of the Career Education Center.

The idea: Wouldn’t it be great to build a house that could be designed by the architecture students, built by the construction students, plumbed by the plumbing students, wired by the electrical students and marketed and sold by the marketing students?

It was such a good idea—one that would incorporate the skills of many of the Career Education Center students—that the new Career Education Center was designed to accommodate this new, exciting project. Construction, welding and auto parts classrooms were situated to open into a large fenced private yard where the tiny home will be built – the first project of its kind for WFISD students.

The North Texas Home Builders Association moved in quickly with its support. The members contributed $4,200 toward the project in 2018 and another $5760.00 on March 3, 3019. Because this project is so big the WFISD educators continue to solicit donations of all sizes.

As planned, the project launched in the 2017-2018 school year. It began in the architecture lab with the architecture students under the direction of teacher Amy Hughes. Her students turned to client, construction teacher Scott Little, for direction on the house design. He envisioned a small, modern house with a porch that incorporated windows to take advantage of scenic views. Later, like a typical client, he changed the parameters slightly, preferring something more traditional to appeal to more buyers.

He explained its necessary dimensions, since the home will eventually be transported on the highway to the buyer’s property. 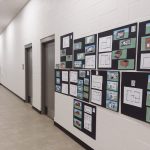 The hallway outside the architecture lab displays the many small house designs created by CEC students.

Each student contributed a design that was evaluated by Mr. Little and Mrs. Hughes. Class designs were narrowed down to three, then to the final design by junior Donovan Williams. He also used the project as his submission to the SkillsUSA competition. In all, four architecture students went to state competition with their small home designs.

The plans for the house were completed in early spring 2018. Then the project passed to construction students.

The 2018 construction students laid the sub-floor for the house before school let out for the summer May 25, 2018. This year’s students will complete construction of the house, wire it, plumb it and sell it, setting up a two-year cycle for the CEC’s largest project ever.

“We hope to sell it for what we have in it and use the proceeds to build something bigger next time,” said Mr. Little.

While this is the biggest project the construction students have ever tackled, it’s also the most expensive. “We are excited for this project and happy to have anyone help us along the way with monetary donations,” said Michelle Wood, CEC director. The CEC welcomes donations of all kinds toward the project. For more information on contributing to the CEC’s first home-build, contact Mrs. Wood at mwood@wfisd.net or by calling 235-1000, ext. 33005. 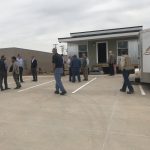 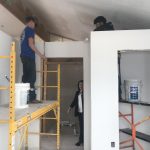 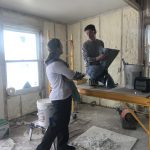 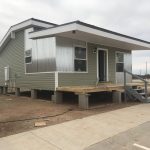 The NTHBA is excited to feature the project in the 67th Annual Parade of Homes scheduled for June 7th, 8th, 9th & 14th, 15th & 16th, 2019. We want the community to see the skills these student are learning that will allow them to go directly into the workforce. 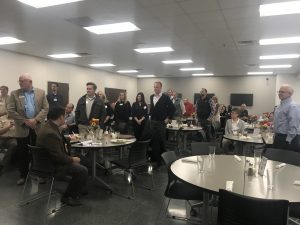 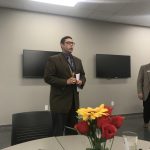 Here. Mr. Griffiths mentioned they are holding community forms to get public input on what actions the WFISD should be take regarding schools. It is apparent something needs to be done with the existing structures, either refurbish or build new.

There are a lot emotions and history with the current facilities but there are a lot of things that need to be considered. The kids of today are not the same kids of yesteryear. Learning technics have changed and the old structures were not designed for what technology might look like in the future. Do the citizens want to spend 100’s of millions of dollars refurbishing or build new state of the art facilities that will draw people to Wichita Falls. One of the key factors manufacturers and business look at when contemplating moving to Wichita Falls is the schools. How well are they equipped for educating our children, what do they offer for our children to advance and be the best they can be?

The goal of the WFISD is to gather input from the community, discuss the information and decide the best way to move forward. He mentioned the WFISD may consider having a tax ratification election which would help the district gain 1 – 2 million without raising taxes. These funds could be used to help do some upgrades and salary increases. In order to take care of the big picture, Peter expressed it would most likely will be a bond election. If so, the district would look at doing it in phases. He said based on history, it is very hard to get a bond passed in Wichita Falls if it is over 60 million.

In conclusion, Mr. Griffiths mentioned the CEC Center has been a great facility. It is a transformer building with versatile classrooms to meet future needs. Mr. Griffiths mentioned VRJC is going to start a satellite sight at the CEC Center for the dual credit students. MSU is also interested in getting in on the action which the WFISD is very excited about but bottom line is, it will not matter how many students graduate with skills, if the community doesn’t utilize them.

Michelle Wood, director of the CEC Center asked that members of the NTHBA please contact the CEC Center and let them know if they have openings with their business. Many of these students don’t know where to look to find a job upon graduation with these skills or part time interim jobs while they are still in school.

If you are interested in hiring skilled graduates or students in training, please contact Michelle Wood (940)235-1091 at the CEC Center. Or email her at mwood@wfisd.net.