The North Texas Home Builders Association hosted their April 1st Monthly General Membership meeting a bit different.  Instead of having a speaker for the meeting, members, along with Lt. Colonel Marcov and guest Jeff Pittman from the 363rd Training Squadron, had the opportunity to network with one another by participating in a couple of team building games.

The meeting began like any other with invocation given by T.C. Sanders of FirstCapitalBank of Texas, going through the buffet and then sitting down and eating their lunch.  Announcements were made to take care of the normal housekeeping and then the fun began.  Attendees were given a number in their name tags as they arrived for the luncheon and were asked to move to the table that coincided with the number they were given, when everyone was finished eating.  Tables were set up so they would represent various types of businesses.  Attendees were then asked to find out 5 things everyone at the table had in common.  They were asked to remember those items for a later time.

Next, each table was given 1 yard of scotch tape, 1 yard of string, 12 sticks of spaghetti and one marshmallow.  Each team was asked to build a tower and to make it as tall as they could.  The marshmallow had to be resting at the top of the tower and the tower had to stand on its own in order to qualify.  Teams were given 18 minutes to complete the task.

Once they were told to start, everyone put their thinking caps on and went to work. 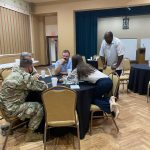 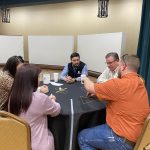 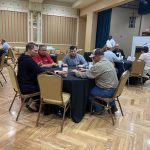 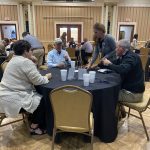 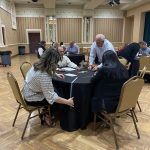 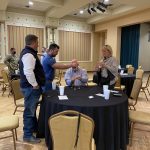 Some began building a foundation while others began building from the top.  Some were holding the spaghetti while others were taping them together.  Most used tape to hold their spaghetti together and reinforced with string as they began to realize the weak areas.  Every team worked vigorously together to finish in time. But most of all everyone was having fun.

When time was called, three towers were able to stand alone with the weight of the marshmallow on top. 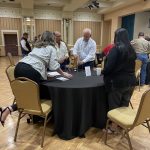 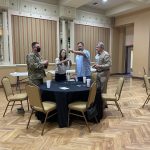 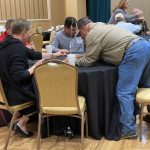 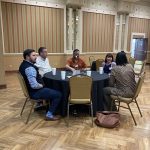 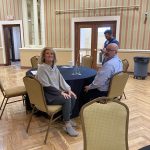 Everyone was close in size but the winning team had a tower that stood 22” and each member was awarded a $25.00 gift card.  The team consisted of David & Vanessa Parkey, Alan Hinson and Shelley Welch. 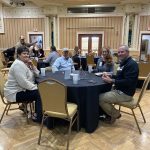 After teams were awarded, T.C. Sanders, Chairman of the NTHBA Meetings & Education Committee, explained the takeaways from the game.

Teams were then asked to tell what they had learned about each other during the first team building game.  Many said they had things in common such as:  all like to eat, all like to hunt, all were from Wichita Falls, all had children, and all were members of the NTHBA.

Even though we were low in numbers, we were not low in camaraderie, it was a great meeting!