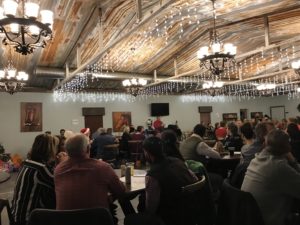 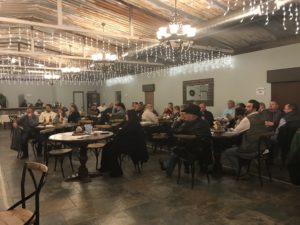 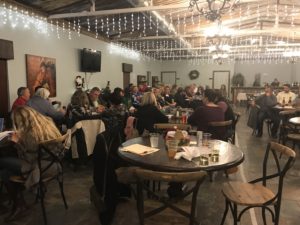 Over a hundred people braved the arctic blast on December 7th, with a wind chill of 28 degrees, to attend the NTHBA annual Christmas Party.  This year the committee took a leap of faith to do a Mystery Dinner with a twist.  They were not disappointed.  The committee was astonished when the talent was revealed of the twelve members and attendees that were handpicked to play the characters while the audience was amused. 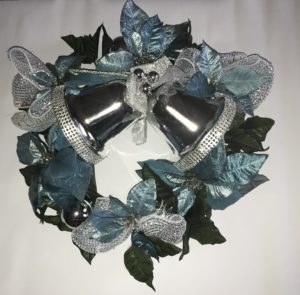 The title was “Who Stole the Silver Bells”.  Barney Brock with Lance Friday Homes was the narrator/Detective Frost and began by reading the synopsis which enlightened everyone as to what was taking place.  This was the annual dedication of the Silver Bells to the Christmas King or Queen of Holy Hills, who was chosen based on their Christmas spirit and festive decorations at their residence.  This year Martha May Bells was being awarded the Silver Bells for the 8th year in a row for her bountiful Christmas spirit and the fabulous ornamentation and lights from all over the world decorating her home. 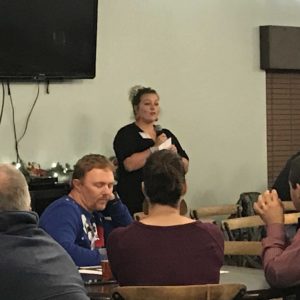 Lindsey Sheppard of First National Bank played Martha May Bells who is an heiress who is used to getting what she wants with the exception of her secret childhood crush.  Martha is a master at eavesdropping and doesn’t mind gossiping about any skeletons that might be lingering in the closets of the other characters.  Her neighbors get annoyed at her ultra-competitive Christmas decorating during the holiday season. 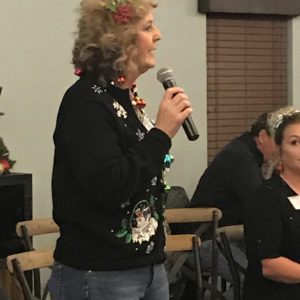 Sharon Ayres of Atmos energy played Carol Knight who is one of friendliest manicurist you will ever have the pleasure of meeting.  She knows most everyone in Holy Hills since the majority of the town are clients of hers.  She stresses during the holidays, however, since her eccentric brother comes to town. 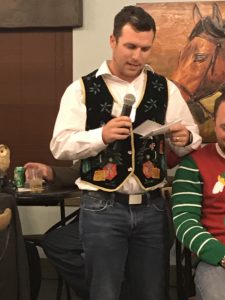 Steven Hinson of Dennis Company played Sam Manger an obnoxious dog groomer at Manger Mutt Cuts.  He is animal lover who really takes great care of the animals but is a terrible pet groomer with horrible ideas for pet haircuts.  His newest style is the box cut. 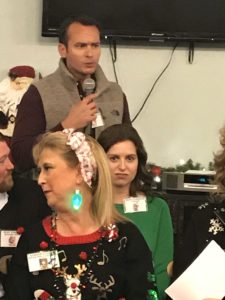 Michael Grassi with Classic Builders played Eddie Evergreen, a baker who is also obnoxious owns Cousin Eddie’s Cookies.  He lives life the way he wants and doesn’t care about being judged. His nickname is 3C given to him by the town’s people and stands for crass, cluttered and chaotic. 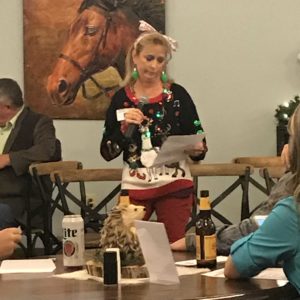 Frances Motley with Breegle Abbey Carpet & Floor played Ginger Starry a manipulative display designer for Nogstrum’s Department Store.  She is known for her outlandish tree designs and gorgeous holiday décor throughout the store.  She definitely has a creative spirit. 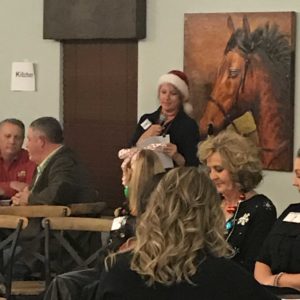 Dianne Brock with Lance Friday Homes played Farrah Frost a beautiful ballerina who teaches private lessons to the kids in town during the off season.  She is playing The Sugarplum Fairy at the Deck the Halls Playhouse.  During the holiday season she is always on her toes. 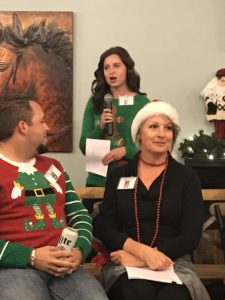 Mindy Schroeder with Archer Title Company played Roxy Rudolph an enigma to most of the people in Holy Hills.  She is a talented Olympic and U.S. National Champion ice skater.  Roxy has decided to put away her skates, slow down and enjoy life.  Her plans are to open an egg nog shop in the winter next to Cousin Eddie’s Cookies. 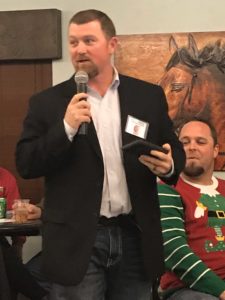 Justin Holcomb of Harmon & Holcomb Homes played Scut Furkus.  He is a notorious neighborhood bully who plagued the Sugar Plum Point subdivision for many years.  However when he inherited his grandfather’s candy store he turned over a new leaf when the towns people picketed.  Nowadays Scut is one of the nicest people in town. 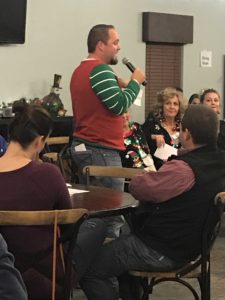 John Stoiloff of Farmers Insurance played Ralphie Chestnut.  Ralphie is genuinely fun to be around because he was born for comedy.  A dedicated train conductor for the North Pole Express, he loves to tell jokes during the ride.  He’s known for the story about his mother buying him a BB gun for Christmas after months of begging and he nearly shot himself in the eye the first and last time he pulled the trigger. 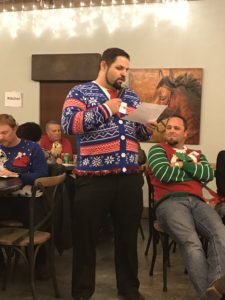 Jake Munholland of Pilgrim Bank played Kevin McAllister, a thirty something who still lives at home.  Kevin suffers from post-traumatic stress disorder from his childhood when he was left home alone and had to fend of burglars on Christmas Day.   The holiday season is mentally draining on Kevin, and he is not sure when or if he can ever get over his Christmas trauma. 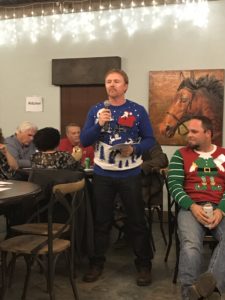 Eric Nelson of Guarantee Title played Howie Langston, a devoted father and overworked mattress salesman.   Every holiday season, Howie will do anything it takes to find his son the perfect Christmas present.  This year, he is at his wits end searching for a Supersonic Man doll.

The cast of Characters acted out revealing 2 rounds of clues for the audience to take notes of.  Then an announcement was made by Detective Frost:

EVERYBODY PLEASE PAY ATTENTION.  WE HAVE AN EMERGENCY! SOMEBODY HAS STOLEN THE SILVER BELLS FROM THE FOYER!  WHOEVER DID THIS HAS THE LOWEST FORM OF ANIT-CHRISTMAS SPIRIT THAT HAS EVER BEEN KNOWN TO HUMANKIND.  LET’S FIGURE OUT WHODUNIT AND FAST – BEFORE THE DIRTY THEIF GETS AWAY! 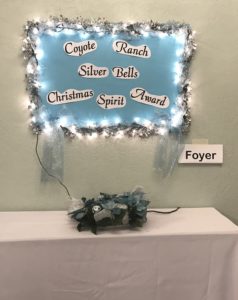 Guest from each table were given the opportunity to turn in their Who Dunnit Guess.  After the Who Dunnit guesses were turned in, characters read their information during their solution round that consisted of reasons why a particular character may have had reason to steal the bells but did not, the thief eventually confesses.   The Who Dunnit guesses were opened to reveal only one table guessed correctly.  The table happened to have only two people seated at it and one happened to be the person who played the character of Kevin McAllister.  Jake Munholland and his wife Anne received gift cards to Texas Road House for Anne’s winning guess.

Everyone really enjoyed themselves and we had a great cast of characters! 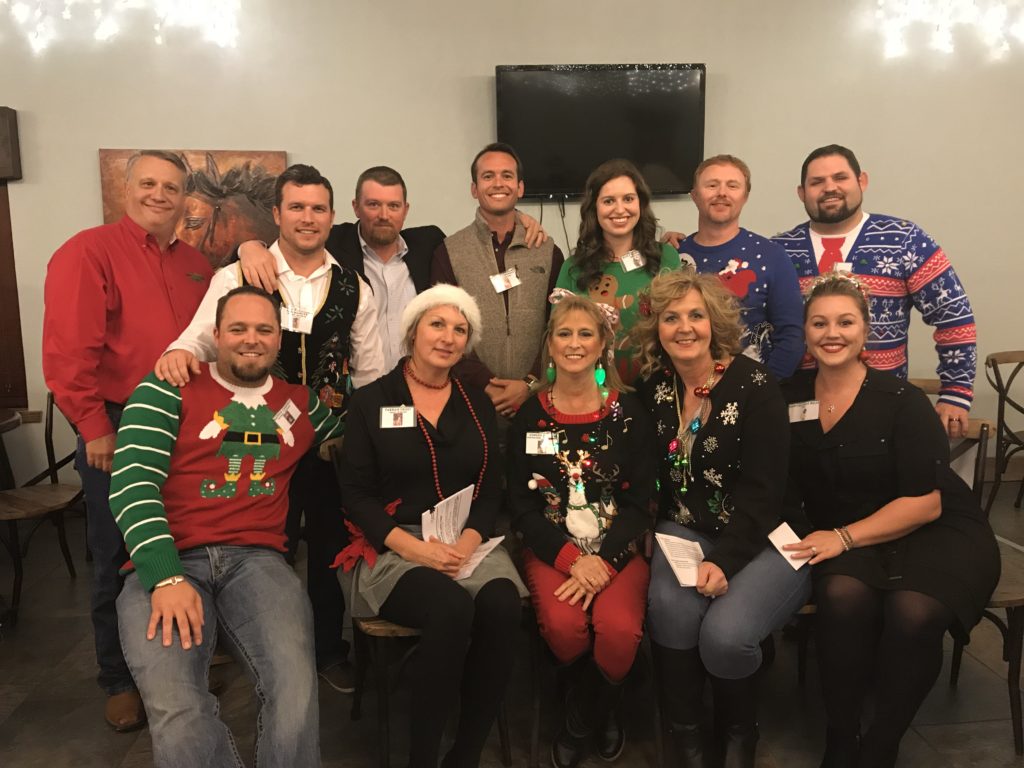 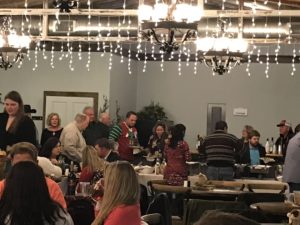 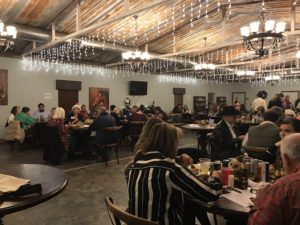 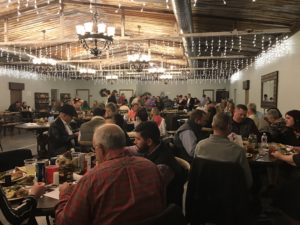 President Michael Grassi presented Wichita Falls Fireman Matthew Childs and his wife representatives for the WFFD, toys donated by the guest, for their Operation Santa Project. 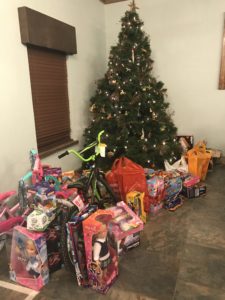 Thanks goes out to all who participated, attended and brought gifts to make our Christmas Party fun and festive.

Your involvement and support determines the success of your association and we are blessed with success!