The North Texas Home Builders Association was honored to have Congressman Mac Thornberry speak at the April 23rd General Membership Meeting. Over 100 members and guest attended the event. 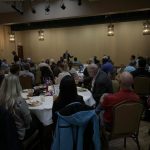 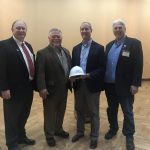 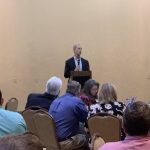 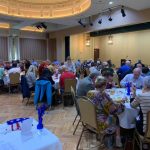 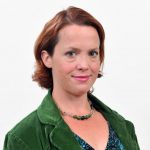 The federal government is expected to create an environment for the economy to grow, said U.S. Rep. Mac Thornberry (R-Clarendon) Tuesday, and lately it has fostered a skyrocketing economy with no signs of stopping.
Partisanship, however, may be keeping the country from making progress in some other areas.
The congressman gave an update about happenings in Washington D.C. at a North Texas Homebuilders’ Association meeting Tuesday afternoon in Wichita Falls.
Homeownership is a strong indicator of the state of the economy, Thornberry told the crowd. Unfortunately, many young adults with heavy student debt and other challenges have hampered early homeownership. Being able to buy and own a home, he said, is a key factor in how society relates to each other and is important both socially and economically to increase citizens’ ability to own their own home.

D.C. update: Mueller report
“Just as bizarre as it ever was,” he said of events in the country’s capital.
Thornberry touched on numerous issues likely to be fresh in people’s minds, beginning with the recently released Mueller report.
The report confirms, he said, that there was no evidence of a conspiracy between President Donald Trump and Russia.
As far as other details about comments the president made, Thornberry said, “That’s just the way he is. That’s nothing new.”
With the Mueller report out, Thornberry said each political party will begin the “spin process” and showcase the findings in a way that benefits them – likely for the next 18 months until the next presidential election.

Economy
“I’m going to update you the way it looks, not just how I hoped it’d be,” Thornberry said about the state of the economy.
Two things the government should prioritize, he said, are the economy and national security.
Last year, real gross domestic product for the U.S. increased by 3 percent, he said. The country’s unemployment rate is about 3.8 percent (with Texas’ rate slightly better).
“The economy is doing really well, better than it has in some time. … There’s not much on the horizon that would send us into a nose dive,” Thornberry said.
Two things that have helped the economy are tax cuts encouraged by the Trump administration and loosening regulations put into place by previous administrations.

“The economy is doing really well, better than it has in some time. … There’s not much on the horizon that would send us into a nose dive.” U.S. Rep. Mac Thornberry 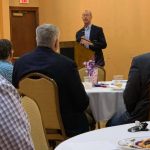 People complaining that their tax returns were less have to keep in mind, Thornberry said, that they paid less taxes because of the tax cuts.
“People are keeping more of the money that they earned and that’s making a difference,” he said.
Many people are taking that money and investing it, creating new jobs.
The country’s “turned a corner” on restrictive regulations by repealing several Obama-era rules, he said.
One regulation overhaul making progress is the Waters of the U.S. designation that cause some property owners concern. The law began in the 1970s with the Environmental Protection Agency, Thornberry said, concerning bodies of water that the EPA can regulate. The terms used about what is, or is not, a waterway of the U.S. was not properly defined he stated.
This gave Obama the ability to call any “mud puddle or bar ditch” a waterway of the U.S. and subject to EPA control.
They tried in Congress to reverse the rule, Thornberry said, and eventually Trump had it pulled and wrote a new regulation. The public comment period for this new write-up ended April 15.
In the future, Thornberry said, they need to do a better job in defining items specifically so that the “bureaucracy cannot expand” on things left too vague. 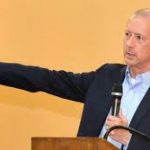 Red River land grab
The U.S. representative said they may finally have a solution to the years-long dispute concerning land near the Red River Texas/Oklahoma border. In previous surveys, the Bureau of Land Management proposed that a huge swath of land in the area belonged to the federal government rather than land owners in either Texas or Oklahoma.
The dispute, he said, should be a concern for all property owners in the country because it endangers private property rights.
A final independent survey is set to decide what is Texas, Oklahoma and federal lands.
Trade war
He does not see it as a “big dark cloud,” but Thornberry said he does worry about the growing trade disputes between the U.S. and other countries.
Changing our ability to buy and sell goods with other counties affects the federal and state economies. Escalating tariffs on wood, steel and other goods can be a danger to stability.
“I hope there is a good resolution and I hope it’s soon,” he said.

National security
Between 2010-2017, the defense budget was cut by 20 percent, but the world did not become 20 percent safer, said Thornberry.
“There are more serious, complex threats than ever before,” he said.
One unexpected outcome from the defense budget cuts was an alarming increase in accidents across aircraft, ships and land vehicles).
“We’re asking the military to do more and more and not give them the resources to do it,” Thornberry said.
In some cases, equipment is run too hard or personnel are not getting the training they need to operate equipment safely.

“We’re asking the military to do more and more and not give them the resources to do it.” U.S. Rep. Mac Thornberry

Since 2017, Thornberry said they have been able to bring back about half of the budget they lost. The personnel shortage is improving, especially the pilot shortage in the Air Force.
Sheppard Air Force Base is in “very good shape,” in part because of the quality of their work and the people who serve there.
The 2005 Base Realignment and Closure hit Sheppard hard cutting back many personnel and programs, especially the medical groups.
Since that time, however, SAFB has more than made up for that loss.
“They are still the gold standard for pilot and other training,” Thornberry said.
One major issue still vexing Sheppard and other flying training programs are wind farms.
The booming wind farm business is affecting low-level flying for training pilots.
It’s hard enough to teach people to fly without them having to dodge windmills, Thornberry said.
A defense bill they are working on would beef up the Department of Defense’s role in having a say when new wind farms are being installed.

Forgetting our history
Even without Sheppard, he said, everyone is dependent on the military for their personal financial security.
“For 70 years, we’ve lead in creating systems around the world and have been remarkably successful,” he said of the military’s role in worldwide affairs.
He said the U.S. and the world are better off than ever in many categories, partly due to the country’s decision to not just watch other counties fight, but be engaged through the Marshall Plan, North American Treaty Organization (NATO) and other organizations.
A bipartisan agreement for decades was that the U.S. should have the strongest military, but now, the congressman said there is debate in both parties as to whether that remains a priority.
“I fear we will walk away from what has been so successful for the past 70 years,” he said.
He worries citizens will forget their history, forged by strong military presence. He noted a recent poll that found more than 60 percent of U.S. people questioned did not know who the U.S. fought against in World War II.
Thornberry said he does not want to think about how bad it could get if the U.S. was not engaged throughout the world.
The debates in both parties will continue to rage, he fears, but hopes they will come out with the right answers. 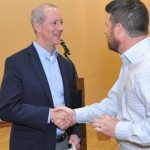 Border security
The first job of a government is controlling who and what comes through their border said Thornberry (R-Clarendon) Tuesday.
The United States has not done an adequate job of controlling the border for years, he said.
After an update on events in Washington D.C., Thornberry took questions from the audience. A woman asked the congressman what “the truth” was in what was happening at the border.
In his opinion Thornberry said, what President Donald Trump has proposed, as far as increasing border security, is a positive action.
There will never be 100-percent security at the edges of the U.S., he said, but steps are moving in the right direction to stem the flow of undocumented immigrants and illegal products.
Equally important to border control, said the fifth-generation Texan, is a reform of the legal system to make it less difficult for people to become citizens the correct way.
Whether they are coming to the U.S. for school, work or just a better life, Thornberry said it was “ridiculous” how long and cumbersome the process is to become a U.S. citizen.
“Yes, we need to control the border, but we also need to fix the legal system,” he said.
He believes about 75 percent of the Congress would agree with him, but fears in a world where many politicians are either “for” Trump or “against” him – there is not likely to be a solution.
“I don’t see any realistic bipartisan immigration reform bill between now and the next election,” Thornberry told the crowd.
“Yes, we need to control the border, but we also need to fix the legal system.”
U.S. Rep. Mac Thornberry
The “value” of various undocumented immigrants is a difficult determination, he said.
There are students who graduate from high schools, go on to universities, but are told they have to take their skills back to their home country because they cannot work in the U.S. Workers in construction and other vocations trying to make ends meet and feed their families.
A hot topic has been so-called DACA children who were brought into the country illegally under the age of 16, often without the child’s knowledge.
Thornberry gave an example of a graduating senior who won a college scholarship and only found out he was in the U.S. illegally when he was asked to enter his social security number.
For these and others, he said there should be a reasonable path to citizenship or legal residency.
However, with thousands of potential Americans waiting years to gain citizenship the correct way, Thornberry said he does not like the idea of someone “cutting in line.”
He does not support automatic citizenship for the millions of people who are in the country illegally. On the other hand, there is no way to go door to door searching for undocumented immigrants.
The only way to stem the flow, he said, is to make sure people in the country illegally are not replaced with another 10 million through unsecured borders.
During the Reagan administration he notes, millions of immigrants were granted amnesty, but nothing was done to secure the border so the flow of undocumented immigrants continued.
Thornberry said there are answers to these pressing problems, but partisanship in Washington is preventing progress on even the little pieces of legislation on which both sides agree.