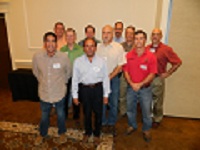 In his remarks to the membership, Miller, who is president of Newell Construction in Lubbock and the incoming president of the TAB, encouraged everyone to support Proposition 2 in the upcoming election. Proposition 2 will fund needed water projects across the state.

Miller noted that OSHA is increasing the number of inspectors visiting residential construction sites throughout Texas. “We met with OSHA representatives to come up with training and safety programs for our members to help them meet OHSA guidelines.”

He added that Texas is the number one state in residential construction for each of the last two years.

Miller said TAB membership is currently at about 10,000 members, down from a high of 14,000 members a few years ago. However, he noted the membership decrease has ended and the organization has enjoyed a slight increase in membership during the past year.

He also urged North Texas Home Builders Association members to attend the upcoming Sunbelt Builders Show. This year the show will be in Austin from Oct. 20-22. “There will be 215 exhibitors and four keynote speakers including Gen. Tommy Frank.”

Miller said attitude is important in any organization. “Like a virus, it spreads!”

In closing, he thanked the leaders and members of the North Texas Home Builders Association for their support and involvement in TAB during the last few years and promised to keep working for the interests of homeowners and builders in the future.