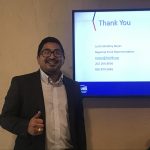 NAHB Field Rep. Justin Reyes flew in Thursday, February 27th to join the NTHBA for breakfast with new members and give an orientation. New members Dan Bachman with Ajon Waste Solutions, Ryan Hammett with Budget Blinds of Wichita Falls, Klayton Hoff and Tatum McDaniel with Jacksboro National Bank, Billy Brock and Paige Schlumpf with Lance Friday Homes, Marc Blagg with Brazos Window and Door, LLC along with President Barney Brock, Board Member Jose Garcia, Board Member and Membership Committee Chairman Brandon Litteken and Membership Committee member Chad Hughes were in attendance with NAHB Field Rep. Justin Reyes and Executive Vice President Teri Gibson and husband Jim.
NAHB Field Rep. Justin Reyes discussed how important membership is in an HBA and how members have a 3 way membership with the local HBA as well as the state and national. He expressed how NAHB’s advocacy works to not only save money for the builders, this is direct reflection on home buyers. Justin said while NAHB is working on the national level, the state is doing the same on the state level and the local HBA’s help on the local level. New members have a host of team members working for them so they are able to do what they do best and take care of their own businesses. Justin educated members on the events NAHB host annually such as the International Builder Show and other meetings. He told them there are educational opportunities, all types of literature with the latest topics important to the industry as well as benefits they can take advantage of. Justin mentioned, like most organizations, if you’re not getting anything out of it, you may not being engaged enough.
After reviewing all the things NAHB has to offer with the new members, each were given a welcome basket from the NTHBA and 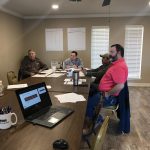 Justin went through several steps giving members ideas on thinking outside the box. One idea was called a most wanted list. Justin said members who happen to see a contractor, supplier or someone who they feel should be a member, at an intersection, parking lot or wherever, they take a picture of the information on their vehicle and post it on a poster board they call the most wanted list. This list can be displayed at a board meeting, a membership committee meeting or even a general membership meeting. The HBA then give some type of incentive to the person who is able to bring in one of the people on the most wanted list. Another thing Justin did was make a list of different types of professions and called it a rolodex. He had everyone look at the list and start putting names they could think of next to that profession. Afterwards, he asked the group how many names they came up with in that few minutes going through that list of professions. One said 8, one said 4, and one even came up with 17. These were really neat ideas that could easily be implemented to try to recruit new members.
During the workshop Justin explained that when it came to members, it isn’t a one size fits all type membership. Each member is unique. There may be some things that are important to one member about their membership that another member could care less about. In order to retain those members, you need to find out each of their needs and try to meet their individual needs in order for them to be satisfied with their membership.
In conclusion, Justin mentioned it is very important to get a member involved. Don’t let them become members then they never hear from anyone in the association. They need guidance. Sometimes it’s good to assign a mentor or have an ambassador that reaches out to the members in order for them to feel that they are a part of the association. Sometime members do not participate because they are not asked.