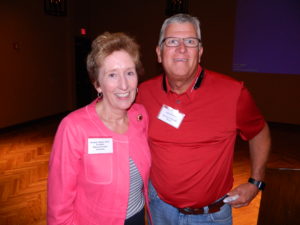 Dr. Suzanne Shipley, president of Midwestern State University, spoke about the role of MSU in our local economy and the future goals of the university at the July membership luncheon of the North Texas Home Builders Association held Thursday, July 7, at the Kemp Center for the Arts.
The school presently has slightly more than 6,000 students representing 44 states and 54 countries in addition to the United States. The school has 241 faculty members and a staff of 401. The university offers 42 undergraduate majors with 17 undergraduate degrees and nine master’s degrees.
During the fall, 2015 semester, the cost for a student taking 15 credit hours and living on campus with a campus registered vehicle was about $9,400 in tuition and fees.
Dr. Shipley noted that the university receives tremendous support from the community. This year to date, the university has received more than $2,699,000. These include funds from University Development, scholarship funds from outside sources, the Annual Fund, the President’s Excellence Circle, the athletic department’s corporate sponsors, the Mustangs Athletic Club, the Fantasy of Lights, the Wichita Falls Museum of Art at MSU, and the Alumni Association.
She noted that 64 percent of students received more than $14,772,000 in grants, while 40 percent of students received more than $5,962,000 in scholarships including athletic, academic and external scholarships.
Approximately 80 students also receive Work Study awards. For the fiscal year 2016, that amounted to $149,672.
Student loans are another vital way for students to pay for their education. In 2014-15, 51 percent of students received more than $30 million in federal, state and private loans, for an average of $8,877 per student. The total financial aid awarded to MSU students in 2014-15 was slightly more than $51 million.
Currently, MSU has tuition revenue bonds projects totaling more than $58.4 million. These include bonds for a new building for the Robert D. and Carol Gunn College of Health Sciences & Human Services, renovations to Moffett Library, a new mass communications building, new turf fields for the football and soccer facilities, a new dormitory with 500 beds, and fire marshal upgrades to South Hardin, Bolin Science Hall, Fain Fine Arts and Ferguson Hall. Dr. Shipley credited her predecessor, Dr. Jesse Rogers, for the university receiving these revenue bonds.
Dr. Shipley also talked about a staff compensation plan that has recently been put into place to bring staff salaries more in line with where they should be as compared to other universities of similar size.
She stressed the MSU is known for its high academic standards, having raised its standards in 2006 and again in 2011. “We lost enrollment both times but have regained that enrollment.”
The university is also recognized for its degrees in high-paying fields.
Finally, Dr. Shipley talked about four “Strategic Initiatives” or goals for the university. The first is “Promote a Strong University Community” and she is working to do this by showing how MSU fits into the Wichita Falls community.
The second goal is “Aggressively Pursue New Student Populations.” MSU is doing this by reaching out to communities between our city and Fort Worth to offer programs in those areas for working adults to continue their education through MSU. She hopes this effort will lead to 2,000 more students in the MSU system by 2022.
Goal Three is to “Create a Destination Residential University” by growing the campus population and culture and expanding opportunities for students here in Wichita Falls.
Goal Four is “Stimulate a Culture of Engagement.” She described this goal as “How we partner with a growing Wichita Falls and help both of us to succeed.”
Dr. Shipley ended her talk by opening the floor to questions. She was asked about campus carry for registered gun owners. She said campus carry takes effect on Aug. 1.
She closed her portion of the luncheon by predicting that MSU is going to have another winning season in all sports.
The Diamond Sponsor for the NTHBA is Atmos Energy, while the Platinum Sponsors are First National Bank and Guarantee Title Company.
The luncheon was catered by Monarch Catering.