State of Wichita Falls was the Mayor’s topic at the August 10th General Membership Meeting. 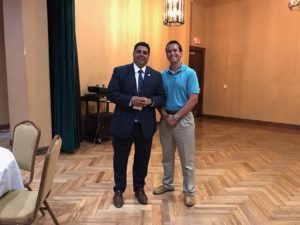 ayor Santellana told members of the NTHBA there is a lot happening in Wichita Falls and in his opinion it is all good; even when you take in account the two police cruisers that were stolen in the prior two weeks, the bright side is, no one was injured.

The convention center was turned over to Spectra, a company who are experts in hosting and managing entertainment.  With their vast area of operations, they are able to obtain big names in all types of entertainment such as concerts, sports events, performing arts etc.  The status for Spectra at this point is as good as the city had benchmarked for.  One of the best things is the employees are now the responsibility of Spectra.  Just after the take over from Spectra, the city dodged a bullet when there was a mishap at the gun show and three employees were shot.  Fortunately, no one was seriously injured.

Spectra has been able to bring big name concerts and events to town and will be focusing on more sponsorships to continue those efforts.   The Night Hawks will be returning but under a different team name.  They will concentrate on better advertising to SAFB and area schools with the hopes of gaining bigger crowds.  The MPEC did lose the Hockey team because it was not supported well.  It is possible it could be brought back with a different team but it is not for known if or when.  In the mean while it may sit idle for some time.

Mayor Santellano mentioned he isn’t always everyone’s favorite when it comes to some decisions made for Wichita Falls but he will always look out for what is best for the citizens.  His continued stand on having a balanced budget can cause a little tension but he is proud to say he has not been forced to raise taxes for two years in a row when putting together the budget.  The only time he would be in favor of new taxes is when it determines whether the city is able to keep enough emergency personnel hired to run the city efficiently or not.  He said it could eventually be an issue. The city has to keep 200 police officers employed and is constantly in fear of losing them to the metroplex due to salaries.  Another concern is the number of graduates from the academy.  Each year it becomes fewer and fewer.  The academy was graduating 12 each time and the last graduating class only had 7.

Mayor also mentioned how aggravating it is when people do not realize the city and county are not one entity and want to blame the city for the raise in the county taxes.  He said the county is in charge of their own budget and decisions to raise taxes.

He mentioned how proud he is of what Henry Florsheim and the Chamber of Commerce have been doing with the Choose Wichita Falls and Economic Development.  There is a huge push for economic development and the staff and council are working together with a steering committee to promote the downtown area.  With new entertainment venues, living quarters and businesses revitalizing downtown, opens up a whole new area for MSU students, SAFB and citizens to patronize.  He said the city is behind economic growth and f the committees focused on revitalization of Wichita Falls sees the need to spend time and resources on something then that is what the city will do.  Downtown is the heart of the city and everyone is wanting to be a part of it.  It will take money and public and private partnerships are necessary.

The city is still working on the determination to help fund a hotel near the MPEC or not.  Wichita Falls is losing out on a lot of big conventions because people want to be on premises with their meeting and exhibit rooms.  Wichita Falls is not equipped at this time and it will take outside dollars coming into Wichita to make it grow.

The Chamber has been instrumental in helping to draw the Top of Texas Market Antique show to Wichita Falls as well as the National Horseshoe Pitching Tournament which will take place in 2019.  This will be thousands of people spending money in Wichita Falls.

Another big happening is Lake Wichita Revitalization committee receiving their 404 permit which allows them to start dredging the lake.  Stephen Garner and Tom Lang had a dream and began action on that dream and now it is becoming a reality.

The CEC Center is another vision that has come to fruition and one of the first steps Wichita Falls has taken hoping to help stimulate growth.  We still need new high schools as well as junior high and grade schools but we have to take one step at a time.   Businesses look at all of these thing when making their decisions to relocate.

On another note, the mayor along with other city officials have been doing their share of traveling to Austin during the legislative session to do their part in trying to keep wind farms from being an issue to SAFB.  Mayor said the wind farm companies had 24 lobbyist to the 3-4 city officials Wichita Falls had.  With wind farms being a billion dollar industry, they don’t want any legislation going against them.  Congressman Mac Thornberry, Senator Craig Estes and Representative James Frank are all aboard to help fight to keep Wind Farms out of the 25 mile radius that would effect SAFB.  Military installations are the 2nd largest economy in Texas with installations all over the state.  Wichita Falls would be divested if anything was to happen to SAFB.

Other topics that were a concern to the Mayor were Tax Caps.  The state is wanting one master formula to cap taxes.  Wichita Falls doesn’t really fall into the one size fits all system.  Where many places in Texas are growing in double digits, Wichita Falls is growing less than 1% per year.  With a cap in taxes as the state wants, it could lead to the city having to cut services to be able to maintain.

Annexation was another item.  The state is wanting dictate on how municipalities can annex around their city.  Mayor mentioned Wichita Falls is having a hard enough time growing and doesn’t need Austin hindering our growth.

A question was asked on were Wichita Falls stands on the water projects even though the lakes continue to be full. The update on the water is: the pipeline is in the testing phase and the city continues to move forward on Lake Ringold.  There is a lot of red tape with projects such as Lake Ringold which inhibit us from being able to get outside funding.  If this wasn’t the case, we would’ve had someone else that was willing to fund it.

In conclusion the Mayor told the audience he wants to be an active mayor, not passive.  He said, you can drown in negativity all day long but he refuses to do it.  Growth is the ultimate goal for Wichita Falls.  We have, SAFB, MSU and Vernon College other towns with these entities continue to grow.  Wichita Falls can too. 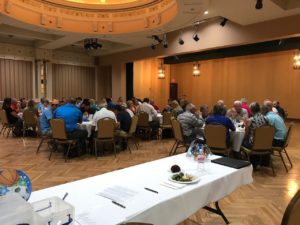 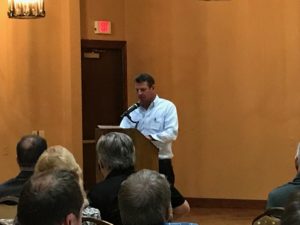 Along with the Mayor addressing the crowd, the NTHBA had a few housekeeping items Kolter Lukert gave announcements and opened the floor for nominations for the 2017/2018 officers and directors.  No nominations were given.

Barney also addressed the crowd and gave report on the summer TAB committee and board meetings attended by members of the NTHBA during the Sunbelt Builders Show. 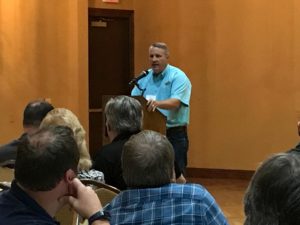 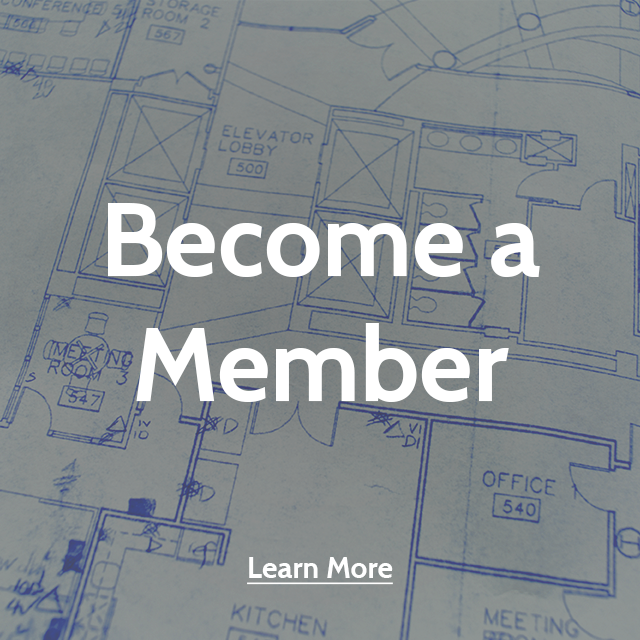