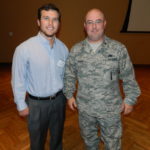 Major Oliver Samuel Ulmer, commander of the 363rd Squadron at Sheppard Air Force Base, was the featured speaker at the November Membership Luncheon of the North Texas Home Builders Association. He discussed the “Squadron Adoption” program at SAFB, giving a history of the program and telling why it was both important to the community and to the Air Force.

Major Ulmer spoke to approximately 50 persons at the Kemp Center for the Arts. The lunch was catered by The Iron Star Catering.

Using a power-point presentation along with his narrative, Major Ulmer explained how the program improved the relationship between the city and the base when it began in 1959. He said The Rotary Club was the first organization to “adopt” a squadron. Soon, 50 organizations were involved in the program.

Major Ulmer also said the city’s “Squadron Adoption” program was the first of its kind between any city and Air Force base. “We are the only community in the country that runs the program, not the military affairs committee,” he explained.

Because of this and other programs, Major Ulmer stressed that after spending several years overseas, Wichita Falls was on the top of his list when he came back to the states. “In Wichita Falls, we find a friendly atmosphere that is ideal for raising a family,” said the father of three. “You can look into their eyes and know they mean it when you greet someone on the street.”

Prior to coming to SAFB, Major Ulmer spent time in Saudi Arabia, Germany, Afghanistan, and England.

He noted that the “Squadron Adoption” program improved understanding between city leaders and the Air Force personnel. He said our relationship is among the best in the Air Force. “That’s why a lot of people retire here.”

He also noted the success of “Operation Thanksgiving” where families host training students for Thanksgiving. “It is an awesome opportunity to meet people in the community and to have some freedom from training.”

He added that people can sign up to participate in “Operation Thanksgiving” through Nov. 8, by calling the base chapel at 676-0014. Last year 900 student airmen were “adopted” by community hosts. “This is another example of what a community relationship should be.”

It was announced that the Christmas Party will be Thursday, Dec. 13, at The Elks Lodge with the social hour from 6-7 p.m. and the dinner following at 7 p.m. Door prizes will be presented.