The North Texas Home Builders Association continues to be lively and involved. Around 63 people attended Family Night on August 1, 2019 at 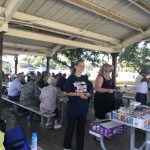 Weeks Park Pavilion on Southwest Parkway. We were honored to have several of our 363rd Training Squadron families and friends form SAFB join us.
In spite of 100 degree weather, there was a light breeze and shade from the mature trees which helped to keep everyone comfortable. First Bank cooked and served bratwurst, smoked sausage, hot dogs, hamburgers, chips, cookies and an assortment of drinks with all the trimmings.
While everyone was feeling their plates, Kona Ice arrived and many began lining up to grab some shaved ice to go along with their meal. Carri Devault, Owner/Operator of Kona Ice, has a set up on her truck where she offers the option of her putting the syrup on the ice or you putting the syrup on the ice. Some of those who added syrup to their own ice were quite creative the flavors. 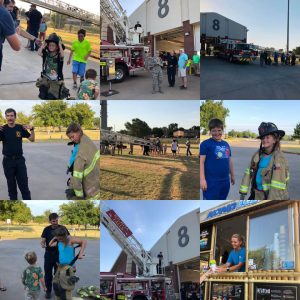 Wichita Falls Fire Department #8 provided a tour of the Fire Station and let the children experience some of the things a fireman encounters during their shift. Several got to put on the jacket from a typical uniform worn when responding to a fire. They all had the opportunity to learn about the fire truck and equipment used on the truck. They even got to see the ladder extended out from the truck.

After their tour of the station, many took the opportunity to cool down once again with the shaved ice.
Now, it was time to find out more about each other. For some fun and interaction, 4 people were asked to choose 5 people and form 4 teams of 6. Three games were played among those 4 teams. Each game had a particular scoring system and at the end of the third game, scores were tallied to determine which team was the winner.

The first game played was called flip it over. Teams were asked to stand on a 3’ x 6’ foot banner, the entire team, and figure a way to flip it to from the side they were standing on, to the other side without stepping off the banner. The team who finished first would receive 10 points, second, 5 points, third, 1 point and last 0 points. 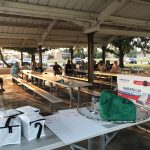 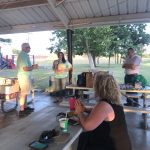 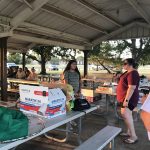 The next game was an egg relay. Each member of the team received a plastic spoon and a plastic egg. The team was asked to carry the egg around a 16’ table in the spoon without dropping it. If a team member dropped an egg, that member would have to go back to start over. Once the entire team had completed the task they would receive a score. This game was scored in the same manner as the first.
The last game was called three truths and a lie. Each team would choose a person to tell three things about themselves and one person from their team to try to guess which one was the lie. Members were asked to come up in front of all the teams to the mic and give tell the four things about themselves. The other team member would try to guess the lie. If that member guessed the lie, that team would receive a point. This would rotate throughout each team until every member on a team had a chance to tell the things about themselves. This was a great way for everyone to learn things about others they don’t usually get the opportunity to do at the monthly meetings.
After the games were played and the scores were determined, the team of Mike White, the Chief, Training Support, 363d Training Squadron, were the winners. Each member grabbed one of 6 bags that had gift cards ranging from $10.00 – $15.00 to various restaurants and eateries.
No, the little ones were not left out. There were several of the older children who participated in the games with the events but afterward, all of the children participated in a challenge of carrying an egg on a spoon around a couple of the tables several times.

Prizes were awarded to each of the children that participated and they all were given goodie bags that consisted of some parent friendly treats. We had a fantastic evening filled with lots of fun and fellowship.
We think each and every one who came out and spent their evening with us and we especially thank First Bank for providing and cooking our meal once again! We would also like to thank the Meetings & Education committee chairman, Randy Schaffner for setting up the tour with the Wichita Falls Fire Station #8 and the Wichita Falls Fire Department for taking time to allow our group to tour your facility. We look forward to next year’s family night gathering.