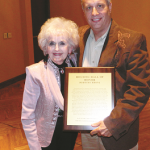 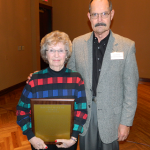 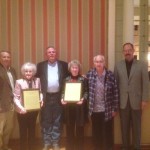 Two women who were active for many years in the North Texas Home Builders Association, Dorothy Rhone and Mary McKie, were honored Wednesday as the newest members in the Housing Hall of Honor at the association’s November 12th, membership luncheon.

Mary McKie was executive vice president of the association from 1980 to 1996 and again from 2007 to 2010. “She was instrumental in growing the association and bringing cohesiveness and professionalism,” said Bobby Rowland in presenting the award.

“She increased political involvement and added family social events to the calendar. You’ve heard it said that behind every great man, there is a great woman. Well, in Mary’s case, behind her was her husband, James, who was a huge supporter and who loved to cook at association events.”

Rowland added, “Mary helped increase involvement with our adopted squadron, was instrumental in the creation of the Fire Safety House for the Wichita Falls Fire Department, and helped grow our involvement in Operation Santa Claus.

“She was executive officer of the Home Owner’s Warranty for many years.” McKie also was active in the Texas Association of Builders (TAB) helping the state association care about the needs of smaller home builder associations.

McKie was also behind creating the President’s Wall of Honor at the association office on Fairway.

Prior to coming to Wichita Falls, McKie worked for the Tarrant County Home Builders Association. It was in that role that she met Madge Francis, who asked her to come to Wichita Falls when Francis retired as executive vice president of the NTHBA in 1980.

Former association president Barney Brock presented Dorothy Rhone with her Housing Hall of Honor award. He noted that she was a teacher and a principal at the School for Listening Eyes for many years before joining her husband, Dave Rhone, in the home building business. She partnered with her husband to start Rhone Building Corporation in 1958.

Together they built more than 400 homes and developed numerous neighborhoods including Expressway Village, Patriot Place, Canyon Trails, and Trophy Park.

Rhone was a founding member of the Women’s Auxiliary Board for the NTHBA in 1980. She has served the association as a director, treasurer, and vice president while also serving on numerous committees including the Parade of Homes Committee, the Golf Tournament Committee, the Scholarship Committee, and the Education Committee.

It is easy to say that without the active involvement and influence of both Mary McKie and Dorothy Rhone, the North Texas Home Builders Association would not be the successful and active association that it is today.

Among the announcements is that the 2015 Parade of Homes will be June 6-14, the annual Christmas Party will be Dec. 11 at the Elks Lodge, and that the seminar “Introduction to High Performance Homes and the New Energy Code” will be held at the Party Barn on Thursday, Nov. 20, with Atmos Energy providing a catfish dinner.

The membership luncheon was held at the Kemp Center for the Arts and was catered by Twenty 11 Bistro.