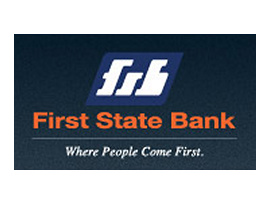 In September of 1990, First State Bank opened its second location in Throckmorton, Texas and in May of 1991 opened its new facility in Graham, Texas which would become the main bank with the Throckmorton and Woodson banks becoming branches. The Possum Kingdom Branch joined our banking family in December of 2000.

First State Bank has grown from a ‘start up’ with two employees to our current $150,000,000 asset size with thirty-one employees and four banking facilities. Our success has been due to professional and friendly employees who make banking a pleasant experience for our many customers.

First State Bank offers a variety of services both personal and commercial.  You can do all your banking and loan needs at First State Bank of Graham.  Call  Brant Lundgren at 940-549-8880 or stop by 1526 4th Street, Graham, TX. 76450 to assist you in your financial needs.