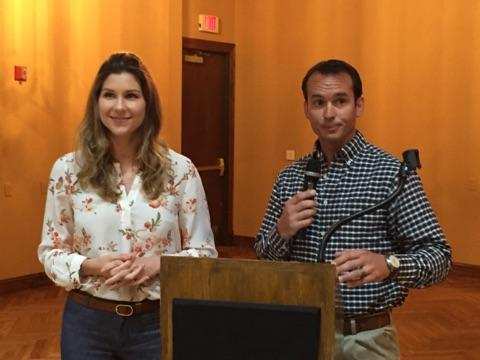 October marks the time of year for the NTHBA to Install the Officers & Directors for the upcoming year.  It was a great pleasure to have someone as passionate about the home building industry as Felicia Wright to drive to Wichita Falls from Austin to speak to our members and install our Officers & Directors at the October 5th general membership meeting.

Kolter Lukert took care of association business by reading the announcements prior to introducing the guest speaker Felicia Wright..

Felicia serves as the Associate Director of Legislative & Political Affairs for the Texas Association of Builders, she develops and executes initiatives to increase the effectiveness of TAB’s legislative advocacy efforts. She is also a registered lobbyist and is responsible for establishing and maintaining effective relationships with public officials, key stakeholders and association members; providing analysis on legislative priorities and reports to TAB task force groups; implementing strategic grassroots campaigns; and tracking political elections.  Felicia writes the Legislative Line e-newsletter and is a contributor to the Texas Builder magazine.

Prior to joining TAB in 2013, Felicia served as a legislative director for a Texas House of Representative and Chairman, a policy analyst for a State Senator, and a committee clerk for the Senate Committee on Veteran Affairs and Military Installations.

Felicia received her Bachelor of Arts in Communication Studies from Westmont College in Santa Barbara, California.

Felicia is an asset for Texas HBA’s keeping them informed on legislative issues to be aware of that will or can be heading to the state capital during legislative sessions.

Felicia began with telling members builders are the heart of the community, and so are each and every member that is involved with the making, selling and protection of a home.  Builders work directly, one on one, with people.  When their builder is knowledgeable about the issues that affect the price of their home, they know their builder is involved with a group that is taking action to protect them.  This is one of the major benefits of being a member of a home builders association, you have access to resources at TAB and NAHB.  Felicia told the audience how she specifically takes information and makes it simple for what members need to know.

Issues that TAB watched during the 85th legislative session and had an impact on included:

Linkage Fees, the tree bill, annexation and a bill that was extremely important a bill James Frank had mentioned at last month’s meeting regarding the Wind Farms.

Other items Felicia mentioned were Title Insurance that TAB worked with the Title Insurance Association to halt proposals that would change the system of pricing and producing title insurance.  By halting these proposals, homebuyers and commercial developers continue to be able to buy title insurance at rates 15% lower today than 25 years ago.  In 2015, TAB stopped the repeal of Residential Fire Sprinkler Installation Prohibition.  Current law, as passed in 2009, prohibits cities from mandating fire sprinkler in new one or two story homes.  This saved consumers in Texas over $410 million

Felicia continued to enlighten members of the Water Task Force that has been set up and continue to move forward helping areas with future planning for water resources.  Other task force that work on policy proposals related to Property Owner Associations, worker misclassifications and lien laws.  She encourages members to join these task force if any of the topics interest them.

Another big item TAB had a big influence on is Energy Code Updates & Reasonable Compliance Standards.  TAB proactively passed a bill in 2015 that established a 6 year minimum cycle for energy code updates for residential construction.

Felicia not only mentioned the things TAB has worked on for builders but said NAHB is currently working on tax reform and is aggressively fighting to ensure the business interest deduction stays in place.  She mentioned NAHB has testified before the U.S. International Trade Commission to provide the home builder prospective on selecting lumber for certain structural lumber applications during home construction.  These testimonies were triggered in response to the changes in the market prices of softwood lumber that came about from the expiration in Oct. 2015 of a nine year softwood lumber agreement between the U.S. and Canada.

In addition to legislation, TAB is engaged in regulatory and legal issues that affect homebuilding.  TAB has been involved in several legal cases in defending housing including numerous cases protecting coverage issues for builders in Construction General Liability policies, winning the Helotes case that prevented cities from implementing building codes and fees in an ETJ and winning several vested rights cases in protecting the grandfathering of projects.

In conclusion Felicia gave a scenario saying if the licensing for builders issue came up, builders are fortunate TAB is able to ensure the licensing would be to the industry’s preference rather than the government deciding those factors on the builder behalf.

Felicia reiterated the importance of membership, in order to have the voice that it takes to be heard on a state and national level.  She said it is also important to stay informed by reading the emails that are sent out regarding issues and especially act upon the call to actions and attend Rally Day. Another is to continue the personal relationships with our elected officials.  With that said, she informed us that Craig Estes will be coming up for reelection and this year he has an opponent that is not from Texas.  If we want to keep him in office it will be important for us to campaign for him.

After speaking to the members, Felicia asked the elected Officers & Directors for 2017/2018 to come up and the Oath of Office was read and they were all sworn in. 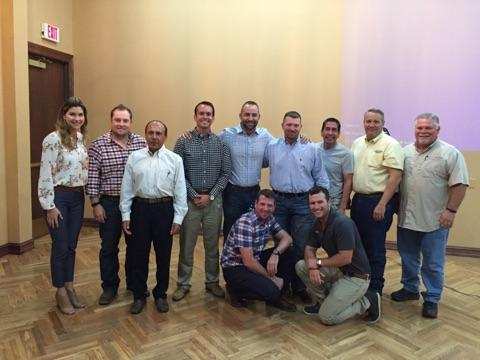 Michael Grassi showed his appreciation to the Officers & Directors for 2016/2017 by giving each one a gift while Barney Brock presented Michael Grassi with a Presidents plaque and gavel.

Long time NTHBA member Charles Barr gave a presentation encouraging members to vote for him on November 7th.  Charles is running for Councilor at Large.  Charles said if elected, he would be an advocate for the home building industry and what is best for Wichita Falls.